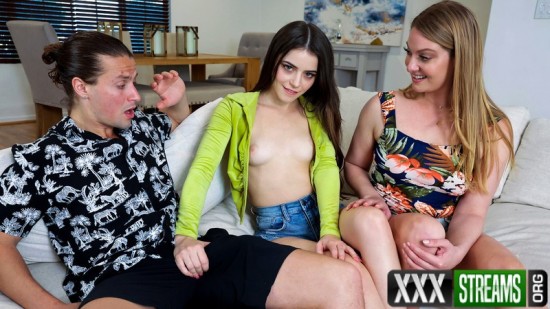 Kyliee Quinn and Veronica Weston are part of a service that sends babysitters to families in need. These two friends have both been babysitting for Jay Romero, who is just exiting an unhappy marriage. When Veronica learns that Jay’s ex-wife is out of town with the kids, the girls agree to get all dolled up to go keep him company.

The girls show up at Jays door together, both claiming that they got a text that Jay needs a babysitter. He invites them in to sort this out. Once they’re all seated on the couch, Veronica tries to claim that Jay left them outside in the cold too long. Grabbing his hand, Veronica puts it on Kylie’s thigh to show how chilled she is. Then she goes ahead and puts Jay’s hand on Kyle’s breasts.

The girls confirm that this is of course okay, even as they’re peeling themselves out of their tops. Exchanging a kiss designed to intrigue Jay even further, they then scoot closer so they can rub Jay’s hardon. Peeling off his own pants, Jay watches down the line of his body as his two hot babysitters share his cock and balls in a double BJ.

Once Kylie and Veronica have had enough of deep throating Jay’s hardon, the girls shimmy out of their shorts so he can warm them up. Kylie gets the first go with the D, spreading her thighs wide open as Jay eases himself into her bare twat. Spooning beside her BFF, Veronica delivers caresses and kisses to ensure that Kylie is fully enjoying herself. That puts Veronica in the perfect position for Jay to shift his hips and glide into her snatch as well. 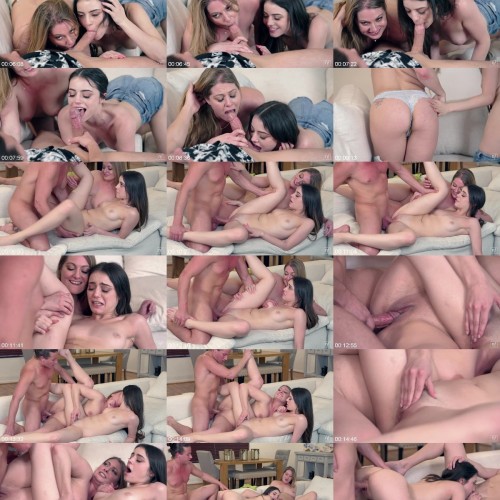