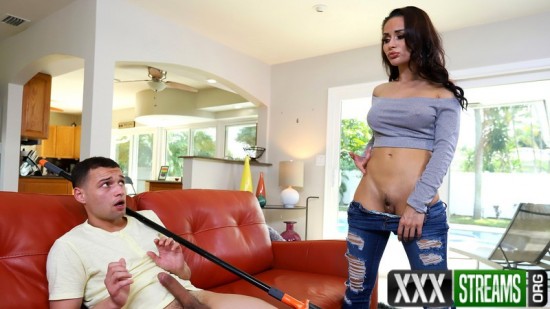 Crystal Rush knows her stepson Johnny is a little pervert. He keeps creeping on her so he can watch her tits and ass as she does housework. Crystal isn’t that much older than Johnny, but she’s his stepmom so she tries to deflect his interest by insisting he do some housework, too. Johnny doesn’t actually do his chores; he just gets more creative. Instead, he goes to hide in the closet so he can keep on perving on Crystal.

Later, Johnny is in the shower jacking off with some sponges when Crystal finds him. That’s the final straw. Crystal takes Johnny by the dick and leads him to the living room where she shoves a broom at him and tells him to make himself useful. Instead, Johnny winds up humping the broom. Crystal cannot believe her eyes! Shoving her own pants down to expose her landing strip snatch, she demands to know whether this is what he wants. He says yes, so Crystal grabs his hair and shoves his face right onto her clit. Johnny is surprised, but he goes with the flow and goes to work eating his stepmommy out. He gets to enjoy Crystal’s big titties, too.

Shoving Johnny onto the couch once again, Crystal climbs onto him and puts her breasts back into his face as she rides him in cowgirl. That ball slapping fuck fest gets even faster as Crystal turns around to gov for it in reverse cowgirl. Crystal gets on her knees to let Johnny fuck her face, then curls up with her stepson on the couch as he spoons with her and fucks her from behind. Johnny has one last position in him, so Crystal gets on her knees and humps his cock as she leans forward over the back of the couch. Eventually Crystal lets Johnny take the reins in true doggy, which brings him right to the edge of his endurance. He pulls out just in time to nut all over Crystal’s face. There’s no time to enjoy the afterglow, because Johnny’s dad will be home soon and Crystal still has so much cleaning to do. 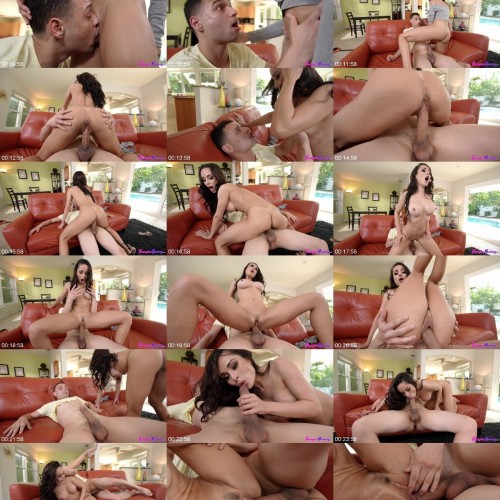